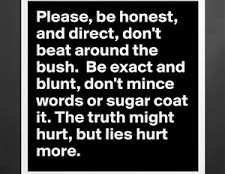 BE HONEST AND DIRECT.   Some of you might say: “I do not lie, so everything must be ok then?” I believe that lying is so much more than we think about and the “bag of lies” contains so much more than we naturally see.  Jesus calls Himself for the Truth. In addition to that, He was very direct. He called a spade for a spade and those who were religious didn’t like Him. He was so direct that He called sins for sins and He revealed the secret things in their hearts. Most of us want ... (read more)

Receive My Updates Via Email